How to make the most of your cell phone while traveling

HomeHow to make the most of your cell phone while traveling 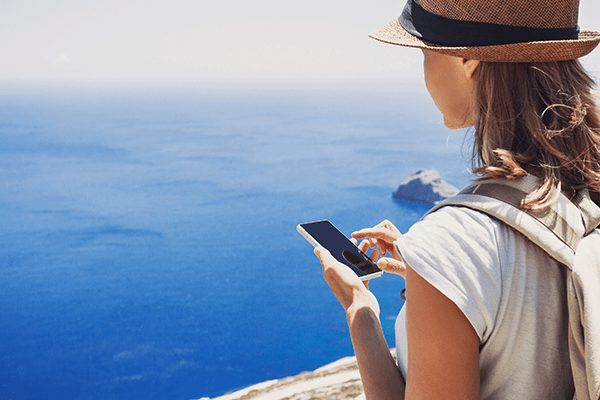 How to make the most of your cell phone while traveling

As the Covid-19 pandemic comes under control in both the U.S. and abroad, countries are clamoring to reopen their borders to international tourists. But if you’re planning to drive, fly or cruise outside of the country in the coming months, it’s important to ensure that your American cell phone plan—and your phone itself, for that matter—are properly suited to your needs while traveling.

From international data roaming restrictions to making sure your phone’s camera is primed for capturing memories, here are three of the most important things to remember when staying connected abroad:

1. Not all data plans are created equal

Your cell phone carrier may offer you unlimited talk, text and high-speed internet in all 50 U.S. states, but those perks don’t always apply when you’re traveling to another country, making it crucial that you read the fine print of any coverage plan to avoid racking up thousands of dollars in roaming charges and long-distance calls.

If you’re leaving the country—particularly if you’re a frequent traveler—it’s hard to argue that T-Mobile’s Magenta plan offers the most comprehensive international benefits. Featuring three distinct sub-plans (“Essentials,” “Magenta” and “Magenta MAX” that range from $24 to $85 per month, depending on which tier and how many different phone lines you select), this coverage group can offer many unparalleled benefits to travelers: unlimited texting in over 200 countries, unlimited data worldwide at up to 4G LTE speeds, and complimentary access to Go-Go inflight Wi-Fi on planes that are equipped for it. It’s available for iPhones, Samsungs and just about any other cell phone model you can imagine.

It’s also worth mentioning Google Fi, which offers many of the same international benefits of T-Mobile Magenta including unlimited talk, text and data in countries around the world—often at a slightly lower price, too. But while this plan is perfect for those who own a Google Pixel cell phone, not all of its coverage benefits are compatible with all smartphones, and while Fi has recently made inroads with newer iPhone and Android models, Quick Mobile Repair recommends making sure that your device can fully function with Google’s cell coverage before making the switch.

However, when in doubt about your specific phone plan’s travel perks, it’s best to turn on “airplane mode,” especially if you’re already abroad; this severs all cellular and data connections, preventing you from incurring potentially costly roaming charges.

If you’re traveling out of the country, particularly if you will be away for an extended period of time or if your existing cell phone plan doesn’t offer robust overseas coverage, purchasing a local SIM card—short for “subscriber identity module”—for your device may be the best option for you. Functioning just like your domestic SIM card that you’ve acquired through T-Mobile, Verizon, AT&T or another major U.S. carrier, these chips are connected to the local cellular network of whatever country you’re in and may provide better nation-specific talk, text and data coverage, depending on where you are. But be careful: there are some important considerations you need to weigh before settling on the international SIM card route!

Most importantly, not all smartphones in the U.S. are compatible with international carriers and generally need to be “unlocked” in order to be used with another phone company’s SIM card; and if your phone is not already unlocked, Quick Mobile Repair’s network of skilled technicians can do so for almost any device at our stores nationwide. You should also be aware that purchasing a local SIM card while abroad will temporarily give you a phone number from that country, and any calls made to your U.S. number while you’re traveling will go straight to voicemail.

3. Don’t forget your charger… and adapter

This should go without saying, but who among us hasn’t gone on vacation only to arrive at our destination and realize we’ve forgotten our phone charger plugged in at home? Before you leave town, we recommend making sure you have the “four C’s” of staying in touch while traveling: your cell phone, your charger, a case for your device, and coverage that’s suitable for going abroad. (And if you’re going to Europe, Asia or another exotic location, remember to bring a handful of travel outlet adapters to make sure that your North American chargers can fit into foreign plugs.)

If you’re heading on a vacation, swing by your nearest Quick Mobile Repair location first to make sure you have all the chargers, cases, screen protectors and other accessories you’ll need to make sure that your device stays safe and secure while you’re away. Our expert Tech Gurus are available to assist you nationwide and recommend the best accessories for your needs.

0
« What exactly is the iPhone SE?
Thinking about opening your own Quick Mobile Repair franchise? »
Recent Posts
Sign up for exclusive offers here!